Well, another UK Games Expo Event has come and gone and what a weekend! I had a great time as I'm sure everyone else did and as I have done reports for the previous two years of this event, I thought I'd continue the tradition and write a report of the 2015 event, the best one yet!

The first thing I noticed when I arrived was that this years event seemed to have a dramatically increased attendance and has most definitely outgrown the Hilton. I was quite glad when I read that next years expo will be held at NEC Hall 1 and the Hilton Metropole. The trade hall will be inside the NEC which should make getting your loot a more comfortable experience! Seminars and other 9am -5pm activities will also be held here. Open gaming, tournaments and RPG's will be at the Hilton  Metropole to allow more space for people to run games into the small hours. This is all welcome news indeed!

The Friday is always less hectic, but it was still busier than last year. With the welcome addition of an open trade hall at 2pm. Open gaming is what I like to do on the Friday and the game library was operated by Thirsty Meeples Gaming Cafe staff. For a small refundable deposit of £10 you could take away one game to play, bring it back and get another one. They did a great job and it was nicely organised with a good selection of games right next to the open gaming area. The hall was large but it did annoy me that the tournaments were using up a lot of that space to the point where we struggled to get gaming space on the Saturday. There was an additional large marquee area outside but even that was full of tournaments and we couldn't find space. In the end we played on the grass outside until space was available. Certainly not ideal though.

The Expo hosted all the usual events; seminars, a family friendly game zone, cosplay, LARP, cinema, entertainment events, a playtest area, bring 'n' buy, special guests and much more. Parking was free, The food this year was a slightly different affair. Instead of the Hilton providing the catering, a food festival was held outside the front of the hotel. I was very impressed with the selection and there was even a red double decker bus, with an open top seating area, serving as a bar which was very cool! The selection of food was good with the likes of Becky's Bhajis, Big Daddies Diner serving great hot dogs, Spectacular Goat making fresh pizza, a meat grill, pan-asian cuisine and even a waffle caravan. There was also a cheap bar in the games room with snacks and other drinks available. Unfortunately I made a schoolboy error and bought a pint at the main bar...the fact that Boba Fett and Imperial Stormtroopers were walking about made me realise I was indeed drinking in a hive of scum and villainy. Especially villainy.

I must also make mention of the games programme. It was not just a map and information schedule like most programmes you are normally given at other events. It was more of a magazine with some very good articles and interviews, a great deal of effort was obviously put into this and all very nicely printed too. 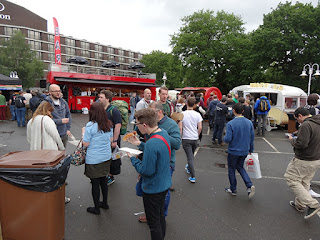 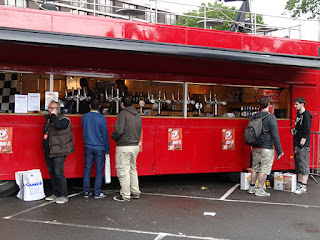 This is part of the expo I think we all enjoy. It was good to see that everyone had put a lot of time and effort into their costumes. There were two remote control Daleks there this year, going around threatening to externimate every human on the Earth. My only worry is that next year there may be an increased number of Daleks and their controllers may attempt to take over the Earth. And if it only takes one Dalek to destroy the mighty Cybermen, well, we are done for. 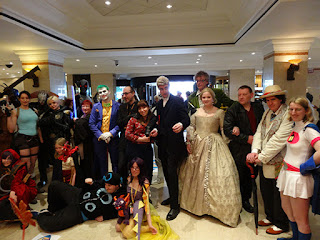 I'm not sure what cosplay groups were there, but drop me a message and I will put the links up here.

There was a jam packed seminar schedule this year; How to design scenarios for X-Wing, talks and discussions with games designer Eric Lang, "Representation in games matter",  "Behind the games industries curtain", creating games for licensed properties, a sci-fi quiz and special guest, Udo Schidmt talking about the marketing of Carcassone and revealing forthcoming releases for the game  Like STAR WARS CARCASSONE! No photography was allowed but Udo showed us the game tiles and demonstrated them.

I managed to attend two seminars but would have certainly liked to have gone to more; "Draw like a pro" and "Write like a pro" in particular. Both of these would make excellent annual seminars. There was no celebrity guest this year, which is a shame, but I did get to enjoy last years talk with Chris Barrie.

I used to love the Muppet Show when I was a kid but being part of a live show, I didn't like. Luckily someone had handed them in and we were finally off.

I won't go into any other antics of the weekend. Like four of us being in a family room making a racket and getting moaned at by staff, recording each others snoring, Rich's Sonic the Hedgehog duvet he brought along or going down for breakfast at 7.30am and being asked "Have you pre-booked?". No I haven't, it's included in the room price. Just stop talking and give me bacon! You're a Premier Inn not the Waldorf Astoria. There is more but I can't go into details...

Rich loves the bring 'n' buy and I'm surprised he's not been banned from it to be honest. Last year I felt like a mule heaving his games about. Felt like playing Buckaroo personally. And, err, this year wasn't actually that much different. Except mule duty got split three ways. I was steeled to quitting that role for the rest of the weekend though.

Got the weekend started at the board game library as none of us, err, actually brought games in for us to play, it was all for the bring n buy. Worst gamers ever. We had a go on a game called Abyss. It was pretty good, but a bit limited. It had very lovely box art though. Then we all headed over to the bring and buy room to check out the new set up....and I must say, I didn't like it. The games were more organised, the checking in system was computerised and looked much faster and more efficient, with barcoded labels being generated from everyones pre-entered details. But the narrow lanes meant it was difficult to take time to look at the games as people were all pressing by bashing you with their Canyon Extreme Hiking 80 litre backpack and walking off without saying a word. I had to leave as my temper was beginning to fray a "little". 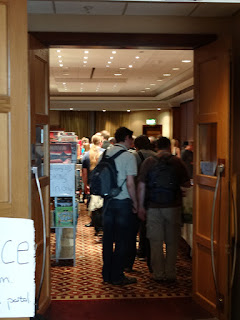 At 2pm the trade hall was open and ready to rock. Previously the trade hall opened on the Saturday, so this was a welcome change. My loot list was small....Small World Realms and the card expansion, oh and X-Wing. That list kind of grew, although I didn't see Realms there, and I came back with X-Wing, a Star Wars Death Star playmat, some ships for X-Wing and Talisman "Deep Realms", designed by my friend (and hopefully designated driver (*wink) for Games Day 2015), Mr Jon New. Good job Jon, I see you have many cards in there that will mess up my normally flawless Talisman game. 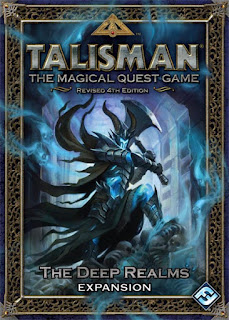 This year I was pretty pleased I got to play some Kickstarter and demo games. First up was a dungeon crawler card game called SideQuest, which was set up just outside the open gaming room. I really enjoyed this - quick, easy to learn and a much more portable game than Descent! After a chat with the game designer, I will in fact be helping out with some of the art in this game. 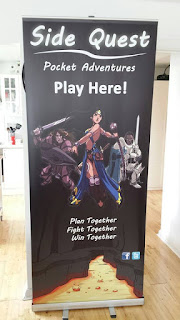 Another Kickstarted game I got invited to play was called Fell. I really love the concept of this game. Think Nintendo's Monster Hunter and that's the theme for this. We didn't get to see all the game as it was set up to play fast demo games, but the basic idea is that you set up a monster from a set of decks, torso, head, left and right leg and left and right arm, with each body part having its own attributes and special abilities. The aim of the game is to defeat the monster with a group of heroes. I can see a great potential for this game but I think miniatures would be a great addition. You can support the Fell Kickstarter campaign here. 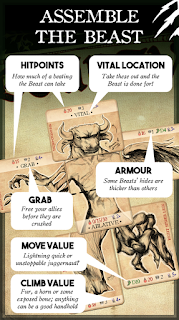 The final demo game I played was "Orction!". I absolutely loved this and the game creator - Elliot Symonds who hosted it, was very entertaining to play against. This game was launching at the expo but I sadly ran out of money for games by the time I discovered it. The game was all about being an Orc Warlord buying and trading slaves to fight for glory. Elliot was very keen to point out that now orc slavery has died out, it's not a politically incorrect game to do. Each turn of the game gives you a lot of different options and of course the auctioneering, which is varied in itself. Unfortunately we couldn't finish the game, it's definately a good party night game and I will be ordering a copy after my wallet has recovered from this show. There is no point me trying to explain it further, so head on over to Quirkative's website and read more about it.......here. 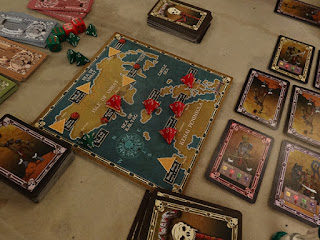 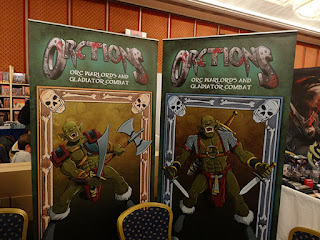 Elliot also held an auction of Kickstarter games and unwanted Christmas presents his brother had given him which was a bit of fun. I would definately recommend a visit to the Quirkative stand if you see these guys next year!

I was pleasantly surprised to see the Warploque Miniatures game, ArcWorlde, had a stand at the expo. I've seen this companie's miniatures before online and it was really good to see the mini's in the flesh at last. The game is the work of Alex Huntley, whose sculptural work  I have seen over at Coolminiornot over the course of many years. I think it's really cool to see someone go from posting pictures of their hobby work online when they are young, to having a stand at a show this big and be doing it a professional level. I love stuff like that. You can visit Alex's website and find out more about ArcWorlde and its amazing miniatures here or visit their Facebook page. Or do both. 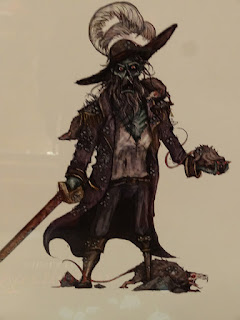 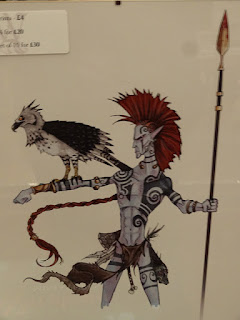 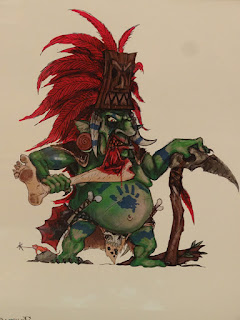 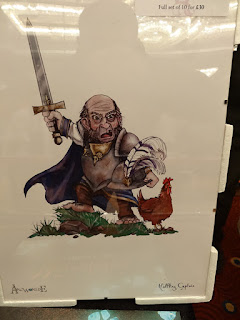 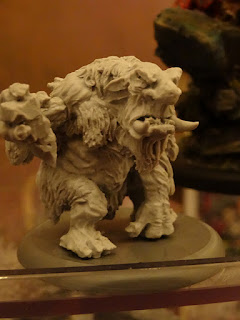 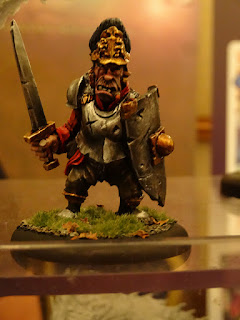 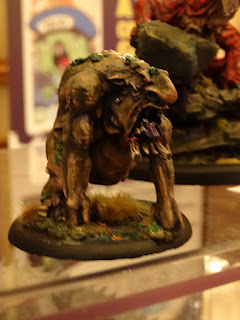 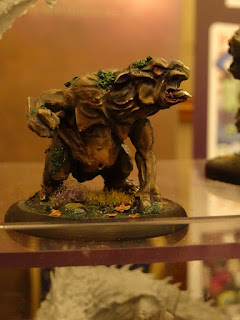 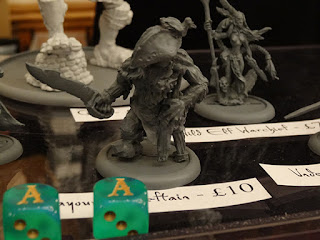 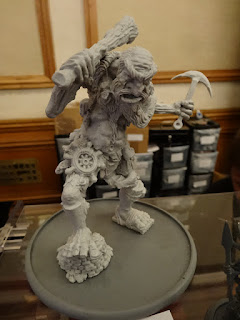 And so another Expo came to close with a Cosplay parade and the award ceremony for the games released in 2015 and that was it for another year. Well done to all the staff involved with the organisation and running of the event, it is going from strength to strength and I'm already looking forward to next year!

dfb
Posted by dogfacedboyuk2 at 17:47