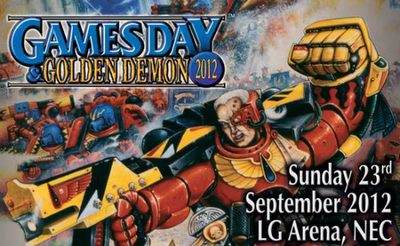 If you have problems loading this page please visit the album itself here : Photobucket album

Well it's been 2 years since I actually planned to have something ready for this event, but finally I turned up! The best part of this year has gone and due to personal problems I haven't sculpted much or done much painting (translate "much" as nothing!). I have been working on something which I thought was probably worth chucking into the Golden Demon event at Games Day UK, so it was a "make the best of it" kind of entry. As it was not intentionally painted for the event, the quality was not strong enough to stand a chance of winning and my actual skill level is not quite yet there anyway. But that said I managed to earn myself a finalist pin in the 40K Monster catergory with an Ork Warboss! Here it is..


You can vote and leave comments on Cool Mini Or Not if you wish, it's all appreciated!

This model is available to buy on ebay. I don't have a display cabinet at the moment and would prefer to fill one with other peoples work rather than my own in any case. If you are interested here is the link to ebay.

Some of the Platoon Brittannica forum guys organised a pre-event dinner at the Little Owl which was a great success and it was good to meet people face to face after talking online. I was expecting to see a few more entries being shown off at the bar, but unfortunately no one brought their entries down. That said when we got back from the meal I got to see Will Dorlings excellent Grimgor Ironhide entry and Maz Wiernikowski's Titan entry which took a silver demon in the flesh and up close - under the hood even! I would have to say this made the weekend

As a non Warhammer player I did think to maybe learn to play but I found it a bit overwhelming with all the kids and the excitable people. I may be a geek but I am not a Super Geek who shouts out "Waaaagggghhhh!" a lot. But really the day was all about Golden Demon, seeing the art and design studio guys at work and a sneak peek at the new Relic boardgame before it hits the shelves.  My basic impression was that everything was well organized, there were always people on hand to answer questions. I was near the front of the line at the sales area, and there were lots of checkouts, didn't really get stuck in the queue for anymore than 10 minutes or so and 5 minutes or so at the checkouts, mainly due to a guy who just bought £250 of stuff and needed to swap some things! So I am impressed overall with it. The price of the ticket is rather expensive though, given that you dont receive a mini now. Major thumbs down for that! There was lots of space and lots of stuff to look at, but I do wonder what other events that they could lay on in addition to what they are currently doing, I have a feeling I may be less interested in whats going on next year, but I will reserve judgement for another year or two yet.

I was very impressed with the battlefields on display, some really nice tables which would have been great to play on, were it not for hoards of screaming kids. Some had special effects on, like electricity crackling from underneath grills, smoke and real water on one, which I missed unfortunately.

The Golden Demon painting competition was my main reason for attending Games Day and the standard of entries was very good indeed and I really enjoyed seeing the models made by everyone else. The cabinets were quite crowded but I had no trouble taking plenty of photos.

The magnificent Fantasy Flight Games were present at the event, with various demo games running from Chaos In The Old World to the most amazing board game ever created - Talisman! Their table was piled high with many lovely looking games. Here is a look at the Bloodbowl card game box art, it caught my eye and looks great, but my advice to anyone looking for a boardgame to pick up Talisman, its a great game, has a ton of expansions for it and, and, and, just buy it!!!

One of the things that made me quite excited to be going to Games Day this year was the presence of a new Talisman based game - Relic. Yes it's 40K Talisman!! There was an expansion for space based action in the original Talisman. I never got the chance to play that one, but I would agree with the decision not to make it part of the fantasy based Talisman and instead make a seperate game. A sensible move. One thing I really like about this game is the playing pieces. They are busts rather than small full figures and look quite detailed, definatly worth painting these!! It's not available yet and I don't know when it will be. A safe guess would be in time for Xmas of course! I already have some plans for these little busts, I am really looking forward to getting my mitts on this game!

This is the prototype board and cards, the art looks lovely!

Games Day 2012 was a real treat for Talisman nuts like me! Not only was Relic present but a new computer game being developed by Nomad Games was being shown off and it looked great!! When Capcom canned the Talisman game they were developing I was really disappointed. Its been a while since then but the license has been picked up and given some justice with this solo play Talisman adventure. Of course they have plans to add multiplayer and expansions and so on as well at a later date. I was listening to a couple of the guys speaking about the game and its future and it is all exciting stuff, it should get a great reception from the video games community and hardcore Talisman fans alike.

Some screenshots from the game. Talisman Island webmaster Jon New chatting to one of the Nomad designers. Jon is the biggest fan you will ever find, he even wears a real life gold plated Talisman under his shirt just in case he ever needs to enter the Valley of Fire.....(okay maybe not, but you get the gist of his level of love for the game.)

If you are a big Talisman fan you should be visiting this site Talisman Island rather frequently. It is the best fan site out there and has plenty of fan expansions, news, photos and information and lots of other stuff to.

Unfortunately I had to seperate the post into several parts due to the number of photos. My PC is also going crazy, going slow, crashing and causing me all kinds of untold woe. Some of the photos are missing that I uploaded and I have no clue which ones without long winded and tedious investigation. So at the end of Part one please continue reading! Here is a link to the public Photobucket album if you want to take a look there.